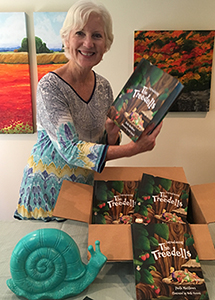 In this fun and interactive book, follow the Treedell journey through trees and meadows and learn all about how the Treedells came to be.
Richly illustrated through the oil paintings of Beth Vacanti, The Treedells is an instant classic and a must-have for readers of all ages!

Buy The Book online or at Carmichael's Bookstores in Louisville, Kentucky.

Listen to The Treedells Song 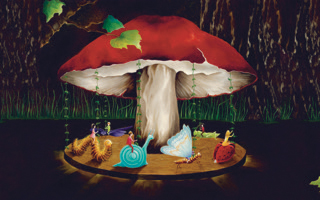 When Beth Vacanti's daughter showed me this painting, I said, "The world needs to see your mom's art! This would be great for a children's book! She surprisingly replied, "If you will write it, you may use my mother's art." A year later, I decided to try! It has been a fun project and I look forward to starting the second Treedells book soon!

Paula Matthews, Author
After a twenty-year business career, Paula Matthews now focuses on arranging and composing music. She enjoys playing the piano and hammered dulcimer.
Paula currently lives in Louisville, Kentucky, with her husband, Tim, and their dog, Morgan. She thanks their son, Jon, for his legal advice. Her granddaughter, Ellie, is the bright young reader she considered most while writing this book.
The gift of music and the gift of painting brought Paula and Beth Vacanti together. Even though they never had one verbal conversation, their creative talents and expressions spoke beautifully to each other!
Paula’s music comforted Beth in her last days. Beth’s art inspired Paula’s desire to create this book in order to memorialize the wonderful images Beth created. In future books, you soon will see how Treedells really came to be!

Beth Vacanti, Illustrator
An only child, Beth spent her early years in the branches of an ancient Bing cherry tree, reading her favorite books, and living grandly in the rich world of her imagination. As a young woman, Beth earned her degree in fine arts from the University of California, Berkeley, where she met her husband. The two were married in 1944, parenting two daughters and a son.
Beth adored being a stay-at-home mom, reading to her children any chance she had, and firing their imaginations up with the world of magic, make-believe, and miracles.
She became a widow at the age of 48, and opened the Beth Vacanti Art Studio in Los Angeles, where she devoted her time to teaching art to children and adults for seventeen years.
She spent her free time creating oil paintings that were intricate, whimsical, and masterful works of art, for which she won numerous awards in Los Angeles. She later relocated to Fayetteville, Arkansas, where she opened her home once more to art students, taught in studio, and organized the first group for artists in the area that still thrives today, the Artists of Northwest Arkansas.
Beth inspired others with her love of people and animals. The beauty of nature and the sense of magic she felt was all around, just waiting to be recognized and shared.
Beth Vacanti drifted away in 2014, lulled into a peaceful passing while listening to the beautiful music of Paula Matthews.
Their destinies are forever woven together through this book.